Customs clearance of an electric vehicle without paying duties

It is noteworthy that the Verkhovna Rada considered various bills on this topic. In particular, one of the options was the Draft Law No. 5494, which declares the large-scale development of the electric vehicle market in Ukraine, and dated as early as December 1 of the distant 2016. In this bill, it was a question of full exemption from taxes for customs clearance of an electric vehicle in Ukraine.

However, it was not he who affected the deputies, but the project 6776-D, on the country’s budget. It was this bill that became a full-fledged law No. 2245 on December 7, 2017. Its essence is the exemption of the import of electric vehicles from all countries from the remaining customs taxes, including excise and VAT.

It is noteworthy that this amendment is valid until 12/31/2018. Therefore, if you have a desire to buy and clear an electric car in Ukraine, then right now is the most favorable time for this. The Ukrainian government rarely pleases the population with such pleasant bonuses and practically unique promotions, so there is less than a year to realize your dream of purchasing and customs clearance of an electric car. Don’t miss your chance.

The specialists of our company are ready to provide a full range of services to implement your plans. Full consultation and support of the process, starting from the purchase and delivery of an electric car, ending with its customs clearance in Ukraine this year. It is not difficult to find and view Law number 2245 on the World Wide Web on your own. However, use only official publications, including the Verkhovna Rada newspaper and the official website of the government. You don’t have to thoroughly study the entire document. Those who are interested in buying and customs clearance of electric vehicles in Ukraine will need to find only seven lines. For convenience, we list them below.

The authorship of the draft law belongs to a group of deputies led by People’s Deputy Howard Robert. It is noteworthy that it was he who co-authored Law 3251, which made it possible to reduce the excise tax on used cars. This decision seriously and positively affected the customs clearance of cars in Ukraine.

Today, thanks to the work of the deputy and his team, motorists in our country can buy and clear a car from Europe and the United States at a low cost, which allows them to save money when compared, for example, with buying a Ukrainian car.

The real benefits of an electric vehicle in numbers

Taking into account the statistical data, it has been established that a car drives an average of about 30 thousand kilometers per year. Average fuel consumption per hundred kilometers is 10 liters. So, each car owner spends more than 70 thousand hryvnia on fuel a year using a vehicle with an internal combustion engine. These are financial flows that are directly washed out of the country.

As for the electric car, it can be noted that the cost of “refueling” will be from 3 to 4 thousand hryvnia per year. The calculation takes into account the average consumption of an electric vehicle of 10 kW per 100 km and the cost of a kilowatt of 1.29 UAH. This in itself is promising and relevant, and after the adoption of Law 2245, regarding electric vehicles, an even more demanded help appeared both for the energy independence of our country and for reducing the burden on the environment, as well as a qualitative change in the entire transport system of the country.

Caring for the environment is the main direction of development of modern society. Most of the highly developed countries are planning to abandon cars running on gasoline or diesel in favor of innovative electric vehicles. Many programs have been developed that stimulate the transition to environmentally friendly cars.

Customs clearance of electric vehicles in Ukraine is one of the services of our company.

What are the advantages of electric cars?

Customs clearance of an electric vehicle in Odessa provides advantages, since the legislative system is aimed at popularizing environmentally friendly transport. According to the resolution of the Verkhovna Rada, by the end of 2018 it was possible to carry out the procedure as economically as possible – without duties, VAT and excise duty. But this decree is not the only one or the first in the history of the popularization of electric cars in the country.

In 2016, a document appeared according to which persons who cleared an electric car in Ukraine were exempted from paying taxes.

Customs clearance of electric vehicles in 2020 has its own characteristics – our company will help you understand the intricacies without making mistakes. Using our services, you do not have to delve into the legal intricacies on your own – this will save time.

It’s no secret that buying an electric car in the USA is much cheaper than in Ukraine. A used car goes through customs clearance, documents are drawn up for it, after which the buyer can safely use the car.

All procedures in Ukraine will be handled by an experienced customs broker who will carry out the clearance process quickly and without problems. The tax rate for an electric car is 1 euro per 1000 W of battery capacity. There are no restrictions on the number of cars per year.

To get complete information from a professional, call us on the hotline number today.

When thinking about buying and clearing an electric car, pay attention to:

These electric vehicles are best purchased in the States. However, pay attention to the fact that American lighting standards are different from European ones. There are also a lot of decent options on the European market, especially since the delivery of an electric car from Europe is cheaper. 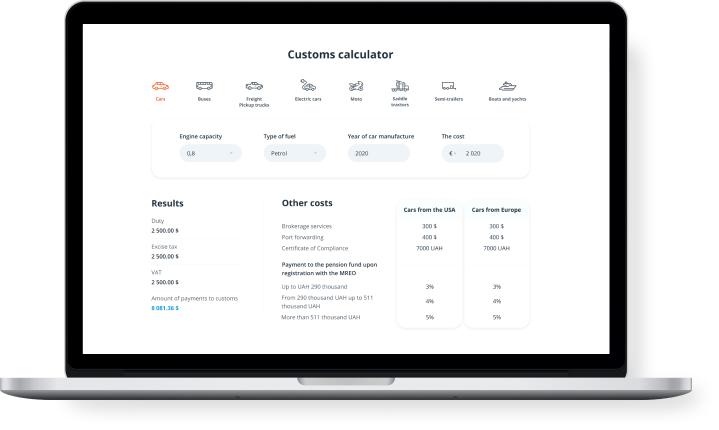